The Nirasaki Omura Museum of Art opened in 2007 based on the Nirasaki born, Dr. Satoshi Omura ‘s collection he had been collecting for ages. Dr. Omura came to conclusion that “outstanding art should not remain for the sole pleasure but to be shared equally for the benefit and enjoyment for all .”In the following year, 2008, he donated his collection to his hometown Nirasaki city for the benefit to promote culture and art development.

Words From The Designer

As I am not a designer but a painter, I struggled with designing ideas for the Nirasaki Omura Art Museum’s logo. Though science is one of my weak points, suddenly my memory as a junior high school student crossed my mind. I was very fascinated by that mysterious form that I saw for the first time in science class when my teacher wrote “Ohm’s Law” and the sign Ω on the blackboard. Dr. Omura is a scientist Japan is highly honored worldwide. He is a person beyond description. It came to me naturally that the humanity, dignity with limitless wisdom description appropriately fits Dr. Omura. I added RA to Ω (ohm) and it added up to Omura. That is how the idea of this emblem established. 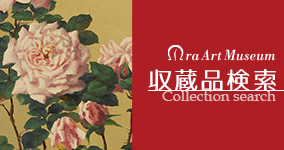